The history of steamships 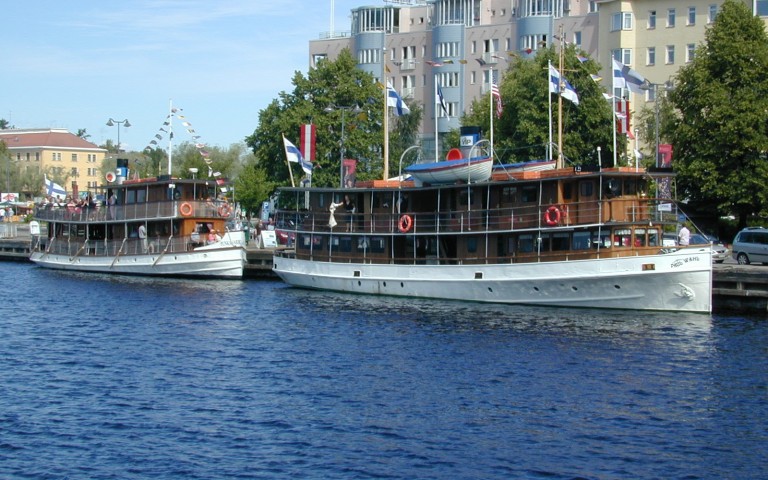 The main reason for the end of the Age of Sail in the late 1800s was the steam engine, invented by a Scot, James Watt, and developed into a new power source for ships. Steamships were faster and safer than sailing ships. They didn’t depend on winds, but could plough their way through waves even in bad conditions.

In Finland, waterways have long provided natural passageways both in summer and winter. All through the early 1900s, water was also a more reliable way of travelling than on the highways. Finnish geography has greatly contributed to the importance of waterways. The Ice Age left behind a valuable gift by forming three significant water systems in Finland. The lakes of Southern Finland connect through rivers, sounds and rapids, resulting in a wide and complex system of water routes, separated by divides, to be used for waterborne transport. The lakes, numbering some 188,000 across the whole country, are connected to each other, forming long, labyrinthine passages. These routes are connected via rapids, the difference between water levels separating the various routes.

The clearing and marking of the Saimaa passages began as early as in the 1500s. The first efforts to open up a connection to the sea were made at the same time. Fortunately, the project initiated by the commander of Olavinlinna Castle, Erik Turesson Bielke, failed: the plan had not accounted for the 76-metre difference in the water levels between different passages.

Water routes experienced their golden age in the 1800s. The budding Finnish manufacturing industry and increasing trade demanded more and more passages for transporting people and goods from place to place. Waterways were improved by clearing and building canals. In particular, the opening of the Saimaa Canal, which will celebrate its 150th anniversary next year, enabled water transport from Saimaa to the Gulf of Finland. The tremendous impact of the canal extended to foreign trade as well.

The construction of the canal took 13 years altogether. The inauguration was festively celebrated with cannon fire in 1856. The first vessels that had the honour of sailing through the lock were named Usko, Toivo and Alku (Faith, Hope and Beginning). The opening didn’t go by without incident, however: the wooden tower of Vyborg Castle caught fire during the lively celebration and burnt down – hardly a good harbinger for times to come.

With the canal, shipping was expanded all the way to the Mediterranean. Its centres included Kuopio, Joensuu and Vyborg. Shipping on Saimaa took some time to develop, however, as the routes were difficult to navigate. The measuring, charting and marking of the main routes was finished by the end of the 1860s.

The northern parts of Saimaa remained unconnected to the sea even after the canal was finished. The passage between Kuopio and Iisalmi was completed only in 1869. The opening of the Oravi Canal in 1861 made travelling easier for the people in Joensuu. When the Heinävesi passage, including parts east of Soisalo, was opened to regular service in 1906, ‘a piece of the most delightful Finland’ was open to all. Work on the passage included getting over a total of 25 metres in difference in water levels: the drop in the Varistaipale canal alone totals 14.5 metres. Such differences tested the skills and sense of humour of the tugboat crews, and the slogan was turned into a mocking joke: ‘A piece of the most frightful Finland.’

With the arrival of the steamship, several new steamship companies were established in Finland, engaged mainly in goods transport, although some passengers were also taken on board. Steamships were highly suited to the narrow and labyrinthine inland water passages, and they soon started offering regular services. As the large freight steamships only stopped at the largest towns, smaller communities began to organise their own shipping companies for local traffic. In the late 1800s, the local passenger vessels were typically less than 20 metres long with only one deck. Apart from passengers, they also carried goods and animals. Freight goods were stowed on deck, and passengers used

the crates as their seats. The local services stopped frequently and at many piers. You could get on board even from a rowing boat. Flags were used for signalling to alert passing ships if passengers or goods were waiting for their services at the pier.

The clientele for local services increased towards the end of the century. Companies expanded their routes by running them between two cities. This way, they were still serving their rural customers and also passengers travelling between the cities. It was slow travelling, though, with numerous stops and night traffic causing moroseness in passengers. Towards the end of the 19th century, the regular passenger and freight shipping was complemented by significant holiday travel or tourism. It posed new requirements on the ships’ fixtures and fittings. To make passengers more comfortable, cabins and salons were added to the steamships.

SS Punkaharju was built in 1905, when the peak of water transport on Saimaa had already been reached. Even so, there were enough passengers and freight for the vessel to sail regularly between Punkaharju and Savonlinna and to stop at numerous piers along the way, all the way up to the 1970s. In the early years of the 1900s, regular services started losing customers, first to the railways, then to motor vehicles. The development of land transport completely changed the situation. The waterways, which until then had formed a connecting system that facilitated travelling, turned into a separating factor, when water transport no longer could meet customers’ needs. Bus services that expanded in the 1940s to cover even small villages’ decreased demand for local ship services. Today, inland water shipping is based almost exclusively on tourism. Travellers are offered both regular and charter cruises. Long full-service cruises have made room for shorter day cruises.

Schedules were quite flexible. An advertisement for SS Wilkas put it this way: ‘Departures are… unless something unexpected happens.’ ‘Something unexpected’ might include a stubborn heifer that refused to transfer from a rowing boat to a steamer, as these vessels transported animals as well as passengers and goods, although by the end of the 1800s, steamers began to specialise in various types of transport. Initially, passenger services were not offered daily, but by the 1890s, the number of travellers had increased sufficiently to make daily services during the week necessary. The season lasted from May until early December – basically as long as there was no ice.

The early decades of the last century were the golden age of passenger traffic on steamships. Savonlinna Spa, for instance, received high-ranking Russian guests who came by ship for the opera.

The depression years of the 1930s tested the ship traffic like everything else, and at the same time, the use of the steamers was also changing. Freight shipping declined significantly. The improvements in land transport infrastructure included buses, which took away their share of local traffic. For example, the first regular bus service between Savonlinna and Heinävesi came into operation in 1923.

Ship tourism experienced its own golden era in the early 1900s. The kitchens of steamships, in particular, became famous. Travelling was comfortable and enjoyable. During stops, passengers would stroll along the shore, buying flowers and wild berries from the locals.

Authentic steamship experiences are still available in Savonlinna. The steamers SS Paul Wahl and SS Punkaharju still run scheduled scenic cruises all summer as well as customised cruises tailored to customers’ requirements. The ships are registered in the national heritage ship register and maintained in their ‘original splendour’, respecting the tradition. The conservation of the ships appears to have great significance in terms of the historic value of Savonlinna and the self-esteem of the older population. For many, these steamships bring back memories of the past, while others are gaining new memories worth keeping.