The waterways of the Savonlinna region – Saimaa at its best 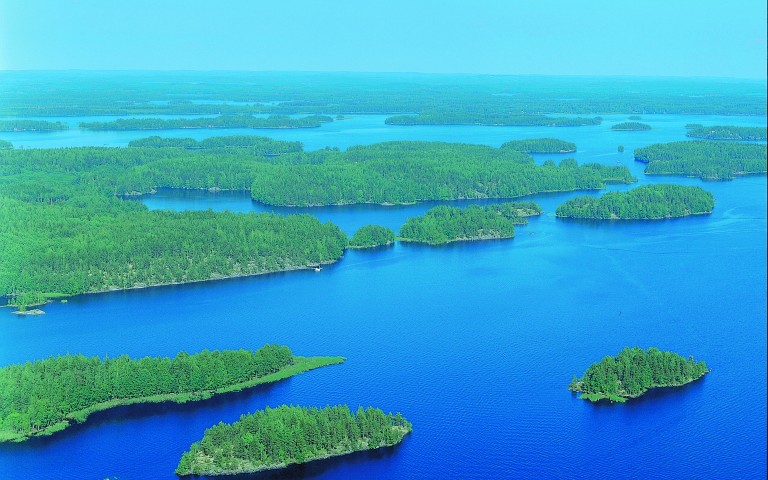 The waterways of the Savonlinna region offer visitors a wealth of opportunities to engage in water activities: swimming, fishing, canoeing, kayaking, boating, cruising and water-jet or seal-boat safaris.

Pihlajavesi, to the south of Savonlinna, offers lake scenery at its best. Labyrinthine chains of islands take turns with large open expanses of water. The spectacular landscape will place a water traveller under its spell for days. To protect the valuable environment and the undeveloped shores, Pihlajavesi has been included in the Finnish shore protection programme. The programme doesn’t prevent explorers from entering and camping in the area, however – as long as they don’t disturb the environment. Seventeen boat harbours intended for visitors have been built in the protected shore areas of Pihlajavesi. The area of Pihlajavesi, which includes Olavinlinna, has been declared one of the Finnish heritage landscapes. Come and discover the serenity of the archipelago!

Haukivesi, with its countless sounds and islands, is part of the Varkaus-Savonlinna waterway. Linnansaari National Park, in the middle of the lake, is a prime example of the Finnish lake environment. The park is a boater’s paradise thanks to its hundreds of islands and large open waters. It welcomes day visitors as well as campers and boaters. Linnansaari National Park was established to protect the valuable archipelago and beautiful landscape of Finnish Lakeland. Its islands provide shelter for Linnansaari’s most famous inhabitant, the Saimaa ringed seal.

Puruvesi is the largest lake with the clearest water in the heart of Finland’s most beautiful tourist destination, the Savonlinna region. Puruvesi is known for its vendace, but its splendid scenery, friendly people and internationally known attractions lure holidaymakers to the area all year round.

Kolovesi National Park protects the natural island environment, the habitat of the Saimaa ringed seal and the forest environment of Southern Finland. Maintained in its natural state, the park provides a pleasant destination for paddling or rowing in the serene nature. Kolovesi is distinguished by high vertical cliffs that can reach up to 40 metres from the water’s surface. This rugged landscape was formed by the most recent Ice Age. Stone Age hunters have left their mark in the form of human figures painted on the rock. Even the ringed seal, the most endangered seal in the world, is a gift left behind by the Ice Age. Its ancestors were trapped in Saimaa when the lake was separated from the Baltic Sea after the Ice Age. Kolovesi is one of the last habitats of this Saimaa native.