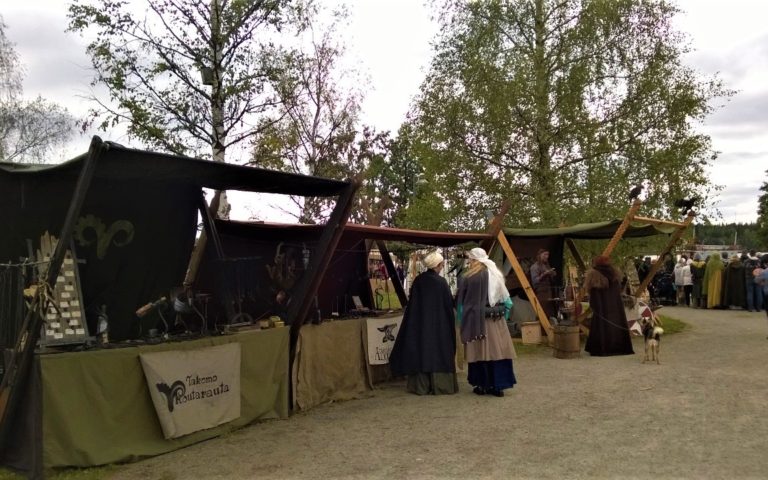 Every year on the 29th of July Savonlinna celebrates its anniversary with a wide range of entertainment in the city centre and around Olavinlinna Castle and Riihisaari Museum Centre. The marketplace fills with stalls and it acts as the main venue for the festival. Cheerful ambience is present everywhere all day long. Concerts of various genres from rock to classical music, shows for the whole family, playful competitions and other amusing events can be enjoyed free of charge or at a reduced price. They offer a lot of fun from morning until midnight, when the festivities culminate in fireworks.

The day is actually the memorial day of St. Olav and it’s called in Finnish “Pyhän Olavin päivä” (or shortly just “Olavinpäivä”). It’s the day on which the Viking king Olav II Haraldsson (born in 995) died in the battle of Stiklestad in 1030. Because Olav was later canonized, St. Olav’s Day was a significant part of the church year from the 13th to the 16th century, in some places even as late as in the 18th century. In Finland St. Olav’s Day became a general market day and a sort of harvest festival to which a tradition of eating a roasted lamb was associated. For a long time, a black ram was grown yearly in Olavinlinna Castle to be offered on St. Olav’s Day. In the 1960s a statue was erected on Tallisaari Island next to the castle to commemorate the ram.

The celebration of St. Olav’s Day was revived in Savonlinna in the 19th century for amusement of the guests who came here to spend their holiday in a bathing establishment which was in operation from the 1890s to the 1960s and named after Olav (“Olavin kylpylaitos”). The festivities in their modern form have taken place yearly in more than three decades. Nowadays the 29th of July is still the name day of Olavi and Olli. The patron saint of the castle has given the name also to Olavinkatu, the present main street of Savonlinna.

...
We use cookies on our website to give you the most relevant experience by remembering your preferences and repeat visits. By clicking “Accept All”, you consent to the use of ALL the cookies. However, you may visit "Cookie Settings" to provide a controlled consent.
Cookie SettingsAcceptAccept All
Manage consent

This website uses cookies to improve your experience while you navigate through the website. Out of these, the cookies that are categorized as necessary are stored on your browser as they are essential for the working of basic functionalities of the website. We also use third-party cookies that help us analyze and understand how you use this website. These cookies will be stored in your browser only with your consent. You also have the option to opt-out of these cookies. But opting out of some of these cookies may affect your browsing experience.
Necessary Always Enabled
Necessary cookies are absolutely essential for the website to function properly. These cookies ensure basic functionalities and security features of the website, anonymously.
Functional
Functional cookies are associated with third party applications and embeds on the site, and their functionality.
Analytics
Analytical cookies are used to understand how visitors interact with the website. These cookies help provide information on metrics the number of visitors, bounce rate, traffic source, etc.
Advertisement
Advertisement cookies are used to provide visitors with relevant ads and marketing campaigns. These cookies track visitors across websites and collect information to provide customized ads.
Others
Other uncategorized cookies are those that are being analyzed and have not been classified into a category as yet.
SAVE & ACCEPT
Powered by